At the time of our last tasting, most Greek yogurts were available only in nonfat versions. Today, the whole-milk variety is on the verge of taking over.

Greek yogurt has taken the American supermarket by storm, growing from just 1 percent of the yogurt market in 2007 to nearly 50 percent today. High in protein and indulgently thick and creamy, it’s a satisfying snack and also acts as a key ingredient in savory dips and sauces or as a substitute for sour cream or cream cheese in baking. We last tasted Greek yogurt in 2010 and thought it was time for a fresh look.

At the time of our last tasting, most Greek yogurts were available only in nonfat versions. Today, the whole-milk variety is on the verge of taking over. Because we generally prefer to work with whole-milk dairy in the test kitchen, we decided to focus on it for this tasting (we also held a separate tasting of nonfat Greek yogurt; see “What About Nonfat?”). We stuck with “plain” flavor, not only because it is commonly used as an ingredient but also because it would give any flavor or textural flaws no place to hide. Interestingly, none of the “Greek” yogurts we tasted—we selected seven nationally available products—are made in Greece. Our former favorite, Olympus Yogurt, the only Greek import in our last tasting, is no longer sold in the United States.

We held two blind tastings, with the yogurt first unadorned and then used in tzatziki, a Greek sauce featuring yogurt, shredded cucumber, garlic, and dill. The textures of the yogurts ranged from thick enough to hold a spoon upright to as thin and runny as regular (non-Greek) yogurt. Some were weighty and dense, others as airy as whipped cream. When it came to flavor, the amount of yogurty tang varied greatly. Two products lost points for off-flavors; one reminded tasters of goat cheese, and the other tasted like “cooked milk.” A handful more were practically flavorless. A select few—our favorites—offered clean, milky-sweet flavor with mild but definite tang, and they were nicely thick, which proved to be very important to our tasters. How could plain yogurt vary so much?

More:
What About Nonfat? 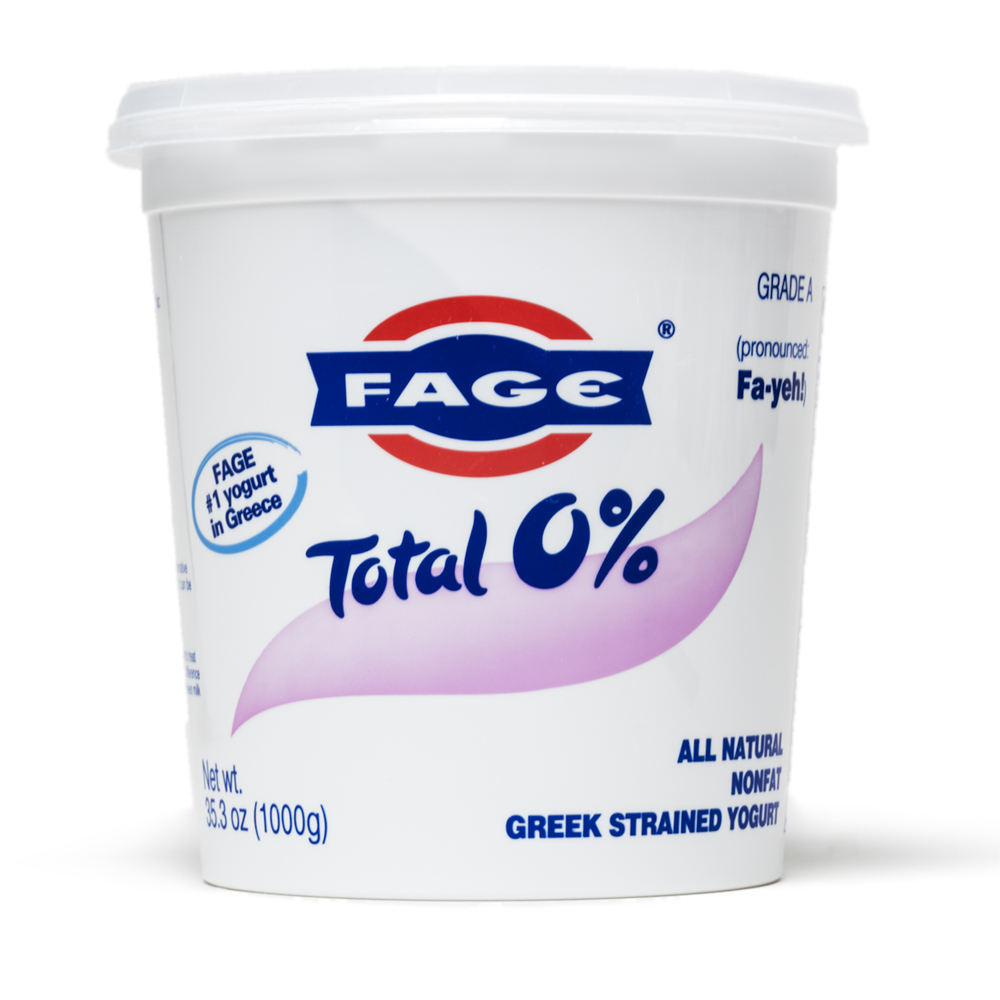 In a separate tasting of nonfat Greek yogurts, we found that thick texture was key. Our favorite was Fage Total 0%. As one taster raved, “It’s impossible that this is nonfat.”

Yogurt is made by adding live, active bacterial cultures to warm milk. As the bacteria digest lactose, milk’s naturally occurring sugar, they produce lactic acid, which lowers its pH, coagulates the proteins into a gel, and creates yogurt’s characteristic tang. To make Greek yogurt, the fermented milk is strained for several hours through cheesecloth to drain off most of the clear liquid called whey. Because so much liquid is strained out, traditional Greek yogurt starts with three or four times the amount of milk as is necessary to make regular yogurt. (It’s because of this straining that Greek yogurt costs more and is so much higher in protein than regular yogurt.)

That’s the basic traditional process, but modern manufacturers have a bag of tricks that allow for customization: choice of bacterial cultures, type of milk (such as from grain- or grass-fed cows) and its fat level, fermenting time and temperature, and the way in which the yogurt reaches its final thick consistency.

Since texture was paramount to our tasters, we started our investigation there. Most manufacturers today use a costly machine called a yogurt separator, which relies on centrifugal force to wring out the whey. But some opt to add a thickening agent—pectin, milk protein concentrate, or whey protein concentrate—instead to avoid the need for investment in costly separators or waste-processing systems for the strained whey. With this method, manufacturers also avoid losing all that volume to whey that’s poured down the drain.

Pectin will also "trap" liquid, which helps prevent separation, while protein concentrates will increase the yogurt's protein content, bringing it closer to that of a strained yogurt. But neither of these things mattered to our tasters, who clearly preferred the creamy thickness of strained brands. Both Cabot’s yogurt, thickened with protein concentrates, and the pectin-thickened yogurt from The Greek Gods lost points for being “grainy” or “chalky,” with “a slight grittiness,” while tasters also noticed that Cabot had a slight “funky,” “cheesy” “off-flavor.” Mirjana Curic-Bawden, principal scientist at Chr. Hansen, a leading international supplier of food cultures that supplies approximately 40 percent of the yogurt cultures used in the United States, said milk protein concentrate can not only give yogurt a powdery, chalky mouthfeel but also readily absorbs odors. If the milk protein concentrate is stored near fragrant substances (such as cheese), those aromas will be transferred to the yogurt.

Still, not all strained brands were well liked. Tasters found that Maple Hill, our bottom-ranked brand, “slumped like soft meringue,” while Chobani was likewise too “loose” and “wet,” characteristics Curic-Bawden said can result from “mechanical shear” during processing. Pumping the yogurt through the processing lines with too much pressure will damage the structure by breaking the bonds that create thickness in the yogurt.

Our winning yogurt, Fage, has a creamy texture, but it is also so thick that we could stand a spoon in it. Fage produces that texture the traditional way: by straining off the liquid whey. Other manufacturers take shortcuts to achieve the thick texture associated with Greek yogurt, adding a thickener instead of straining. In these cases, the ingredient list will also include whey protein concentrate, milk protein concentrate, or pectin. These additives may make the yogurt look thick, but chalky texture will give them away.

A Matter of Taste

More:
Freezing Greek Yogurt
To freeze Greek yogurt, portion it into ½- to 1-cup containers, and then transfer it to a zipper-lock bag. Since freezing thins the texture of Greek yogurt, it can be swapped for regular yogurt in uncooked recipes.

The choice of bacterial cultures is equally important to creating the desired texture as it is to creating the desired acidity (or mildness) and flavor, so we wondered if looking at the cultures listed on the labels might help inform our preferences. According to Curic-Bawden, while manufacturers might tout using five or even more live and active cultures, you actually need only one pair, Lactobacillus bulgaricus and Streptococcus thermophilus, to make yogurt. Unless yogurt contains a documented probiotic strain (which is then clearly labeled with alphanumeric strain identity), any other cultures beyond these two are basically window dressing. However, there are endless variations (or strains) of L. bulgaricus and S. thermophilus that will produce radically divergent results. Some are faster to acidify, some affect texture more, and others produce more tangy flavor. But the exact strains are proprietary and a closely guarded secret, so beyond recognizing brands that are trying to woo consumers with those extra “bonus” cultures, we realized we couldn’t draw conclusions by looking at cultures on the label.

Secondary to a thick, dense texture, our tasters made it clear that some—but not too much—tang is essential. When we measured the yogurts’ titratable acidity at an independent laboratory (a higher number means more acidity), the results ranged from 1.05 percent in our blandest yogurt to 1.47 percent in a yogurt with an “assertive” tanginess. Our top choice was right in the middle with 1.26 percent.

As the main ingredient, the type of milk also has an impact on flavor, mostly when unusual choices are made. One disadvantage of our bottom-ranked yogurt was its hint of “barnyard funk” from its use of grass-fed cows’ milk, which has a stronger taste than milk from grain-fed cows. This was a dividing point for our panel, and even many of those who loved it concluded it was just too atypical for “plain” Greek yogurt.

Interestingly, fat levels didn’t matter to our tasters as much as the perceived richness of the yogurt—which circled us back to texture.

Finally, we compared fat levels in the yogurts. We were astonished that the range was anywhere from 9 grams to 22 grams per cup—far beyond the 8 to 9 grams in a cup of whole milk. Yogurt makers can adjust the fat level either at the outset when the milk is cultured or by making yogurt with skim milk and adding varying amounts of cream at the end of the process. But interestingly, fat levels didn’t matter to our tasters as much as the perceived richness of the yogurt—which circled us back to texture. For example, the two leanest yogurts in our lineup each had 9 grams of fat. One scored near the top of our rankings and the other near the bottom. One of them, Dannon Oikos, made up for its leanness with an extra-thick consistency that left an impression that it was “thick, rich, silky.” By contrast, Chobani was thin and loose, so those same 9 grams of fat came across as “too lean” and “disappointingly virtuous.” Our favorite, Fage Total, contained 11 grams of fat per cup—only half the fat of our highest-fat yogurt—but, bolstered by the thickest, most spoon-standing density in the lineup, it satisfied our tasters.

In the end, Fage Total ($8.49 for 35.3 oz) won top marks across the board. It struck just the right balance of thick and creamy and was mildly tangy, with a fresh, rich dairy flavor that tasted great plain and provided a welcome balance to the pungent tzatziki sauce. One minor note: Yogurt can continue to exude whey even in an unopened container; typically you must stir that whey back in. Fage adds a round of absorbent parchment on top of each tub of yogurt, a nice touch that meant we could skip that step. It’s our new favorite whole-milk Greek yogurt.