Caption Settings Dialog
Beginning of dialog window. Escape will cancel and close the window.
Watch Every Step
The transformation of a few humble ingredients into a rich, deeply flavorful dish is a tradition worth continuing. But does it have to take all day?
Saved
Print
Get the RecipeNew England Baked Beans

In early New England, Puritans baked bread in communal ovens on Saturdays. When the last loaf was pulled from the hearth, the town baker collected bean pots and set them to cook in the residual heat. After bubbling away all afternoon, the beans were served for supper; leftovers were on the table again for breakfast on Sunday. It all worked out to be quite convenient, as cooking was forbidden from sundown on Saturday through sundown on Sunday as part of Sabbath customs.

Today, baked beans are still all about patience: Recipes call for 6, 8, or even 10 hours of cooking to transform modest ingredients—dried beans, smoky pork, bittersweet molasses, mustard, and sometimes onion and brown sugar—into a pot of creamy, tender beans coated in a lightly thickened, sweet, and savory sauce. Delicious, indeed. But must they take so long? I wanted to create the best possible version of this American classic but hopefully without hours and hours of cooking.

White navy beans, which boast a mild flavor and a dense, creamy texture, are typically used for New England baked beans. Step one was to soak them overnight in salty water—an adjustment we make to the usual plain-water soak because we’ve learned that sodium weakens the pectin in the beans’ skins, reducing the number of ruptured beans. That’s a good thing, since when beans burst, they spill their starchy innards, creating a sticky, unappealing texture. Soaked beans also cook faster than unsoaked and seem to absorb water more evenly, so the result is creamier.

The pectin molecules in bean skins are tightly bound by calcium and magnesium ions. When beans are soaked in salted water, sodium replaces some of these ions, causing the pectin to weaken and leading to skins that are less likely to burst during cooking.

To my pot of drained, brined beans, I added some standard flavorings: a cup each of molasses and dark brown sugar, plus dry mustard, black pepper, and a bay leaf. For the pork element, some cooks use bacon, but traditionalists swear by salt pork, and I agreed: It would add meaty depth without the distracting smokiness of bacon. Sticking to the ultrasimple old-fashioned approach, I skipped browning and tossed a few raw chunks of salt pork straight into the pot, where their fat would melt into the beans. 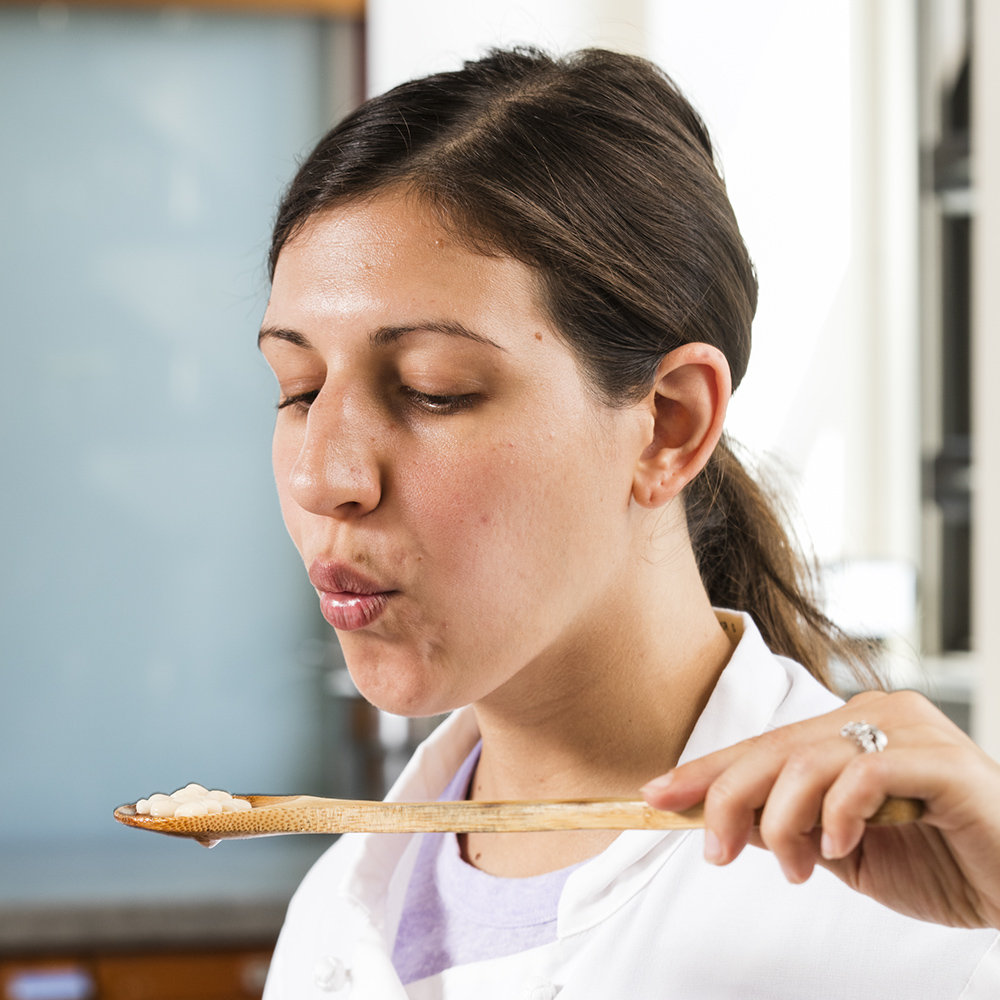 Not sure if your beans are done? Blow on them. The skins of properly cooked beans will wrinkle and curl back when you blow.

Now, about the long cooking time. The test kitchen has plenty of recipes in which dried beans are fully cooked after simmering in water for only an hour. Baked beans take longer because adding acid to the mix via brown sugar and molasses firms the cell structure of legumes and slows down their cooking—but by how much?

To find out, I added enough water to cover the beans by a couple of inches. Then, to jump-start the cooking process, I brought the pot to a boil on the stovetop before placing a lid on it and transferring it to a 300-degree oven. It took 3 hours for the beans to turn perfectly creamy. Longer cooking times, it seemed, were just a holdover from the low-temperature hearth cooking of yesteryear.

Holding back the acidic brown sugar and molasses until the beans had softened could save time, but would there be a flavor sacrifice? I added the molasses and brown sugar to separate batches of beans after 15, 30, and 45 minutes of cooking, tracking how much longer the beans took to soften once the acidic ingredients were added. The results were eye-opening: Adding the molasses and brown sugar at 45 minutes resulted in tender beans in just over an hour, while the 15- and 30-minute batches took twice as long.

The problem was that the longer I waited to add the flavorings, the less they penetrated, leaving the beans pale and bland. Even the batches where the ingredients were added just 15 minutes into simmering didn’t compare to the deeply bronzed beans flavored from the get-go. I would have to live with a 3-hour cooking time—still quite a bit shorter than what most recipes call for.

A Shortcut That Wasn’t Worth It

Our baked beans cook for 3 hours—quicker than many recipes but still a time investment. We wondered if we could shorten the simmering time by adding the molasses and brown sugar after we started cooking the beans, since these acidic ingredients firm up the beans' cell structure and prolong cooking time. While the beans became tender more quickly, they also were progressively lighter in flavor and color. Only when the molasses and brown sugar were added at the start of cooking did the beans fully absorb their flavors.

My next tests involved thickening the sauce, which was too soupy. I eventually determined that covering the beans by just ½ inch of water at the start would keep them submerged during cooking and still create a more viscous sauce. But I wanted it even more reduced. Removing the lid for the last hour of cooking helped the sauce cook down just below the beans, creating an attractive browned crust on top and a rich, velvety liquid underneath.

I also needed to adjust the beans’ overt sweetness. I cut the molasses in half and reduced the brown sugar to just 2 tablespoons. I also threw a halved yellow onion into the pot. Tasters loved the mild, partly sweet, partly savory note it lent the beans as it softened in the oven (no need to sauté it beforehand).

The beans were now really good, but I felt they needed just a bit more character, so I stirred in a tablespoon of umami-rich soy sauce. My tasters (even the traditionalists) approved of the way it elevated the flavor.

Cut Back on Time, Not Flavor

Four cups of water cook down into a thick, savory sauce in 3 hours.

Removing the lid for the last hour of cooking helps the sauce rapidly reduce.

Finally, to capture every last bit of goodness, I made sure to scrape the fond from the pot’s inside edge and stirred it into the beans. Tender, creamy, hearty, and glazed in a lightly sweet sauce, these baked beans had it all—in a modest amount of time.