Caption Settings Dialog
Beginning of dialog window. Escape will cancel and close the window.
Watch Every Step
How do you make a crispy, creamy shredded potato cake that isn’t greasy and is a cinch to flip? It starts with a cake pan.
Saved
Print
Get the RecipeBetter Hash Browns

Hash browns make people crazy, at least according to esteemed 19th-century domestic science expert Mrs. Sarah Tyson Rorer. In an 1892 lecture, she recounted her research visits to psychiatric hospitals, where the patients appeared to be addicted to the fried potato patties they were served, leading her to conclude that the hash browns had caused the inmates’ madness. There’s an obvious flaw in Mrs. Rorer’s logic, but she wasn’t completely mistaken: Hash browns do have the power to unhinge.

For the purposes of my recipe, hash browns are shredded potatoes fried in a round until crispy and brown on both sides and tender and moist (but not wet) on the inside. The cake is transferred to a plate, cut into wedges, and served. And as far as I’m concerned, they are simply seasoned with salt and pepper—no herbs, no onions.

But settling on these guidelines led to a series of questions. How do you flip a mass of shredded, partially cooked potatoes without it falling apart? How do you ensure that the inner potatoes are cooked through at the exact moment that the exterior has turned crispy and golden? And how do you make the hash browns crispy but not greasy?

Such questions might make you wonder if being a bit unbalanced is a prerequisite for making hash browns at home when, after all, they’re available at every diner. But diner hash browns are often soggy and anemic. I prefer to elevate a simple homemade breakfast with ingredients that I always have on hand.

Many recipes call for squeezing the potatoes before frying to remove excess moisture and thus give the cake a crispier outside and fluffier interior. But is it worth it? I made two batches, one with 2½ pounds of shredded russet potatoes that I squeezed dry in a towel and the other with russets that went straight from food processor to skillet. I tossed each batch with a teaspoon of salt and then fried each in a nonstick skillet with ¼ cup of oil, just enough to coat the bottom. To flip the potatoes, I slid the cake onto a plate, inverted it onto another plate, and then slid it back into the skillet with a bit more oil. I did this a second time using Yukon Gold potatoes, a variety with less starch, to see if it made a difference.

All four batches had serious problems. The cakes fell apart when I tried to flip them, and the outsides scorched before the innermost potatoes were fully cooked. All of the samples were underseasoned, and they were also pretty greasy.

The good news was that the squeezing step seemed worthwhile. The potatoes (both varieties) that I had wrung dry produced hash browns with exteriors that were slightly more crispy and brown and interiors that were a bit fluffier than those of the cakes made with unsqueezed potatoes. That said, they were all still a bit gummy and wet. There was also an unforeseen problem: All four batches of potatoes had turned an unappetizing color after shredding; the Yukons were a pinkish brown and the russets a purplish gray. 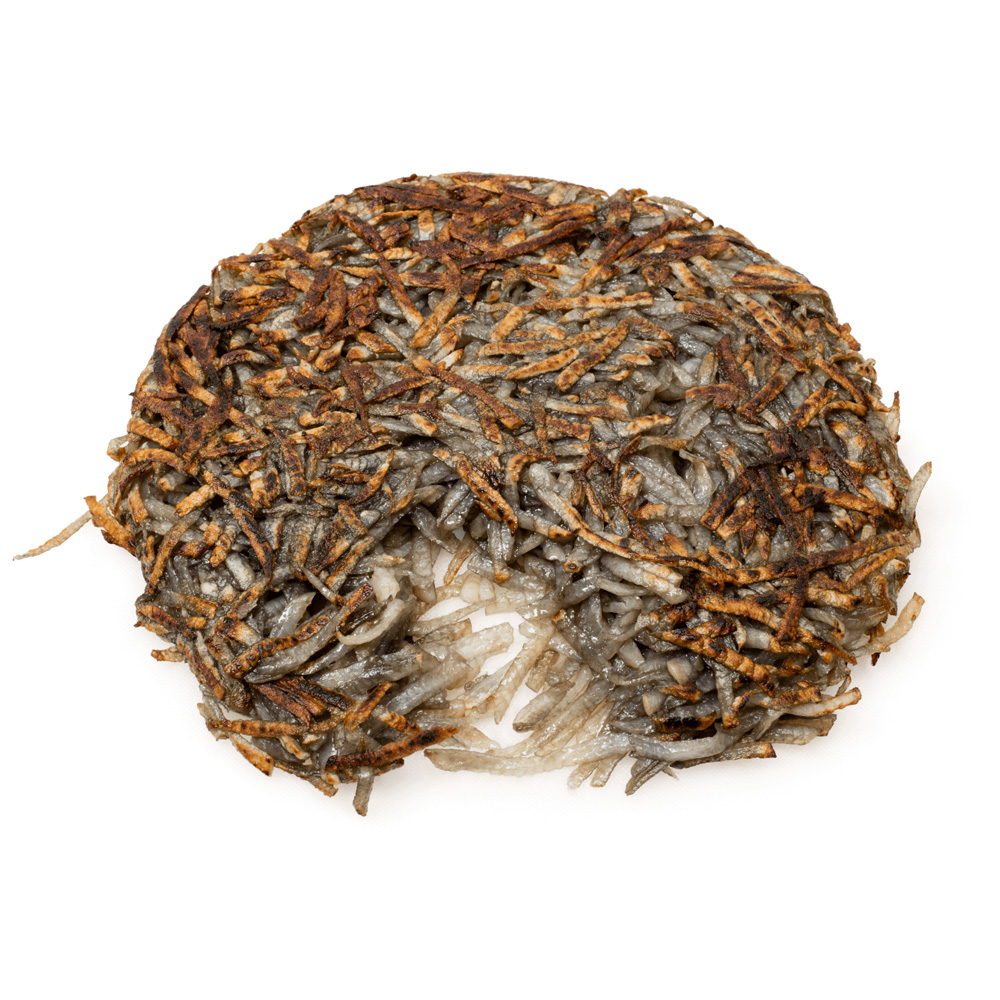 When potato cells are broken and exposed to the air during grating, an enzymatic reaction leads to discoloration. We prevent this by dunking the shreds in salt water, which inhibits the enzyme.

A coworker had come up against the discoloration problem once, and she found that briefly swishing the shredded potatoes in a saltwater solution kept them pristine. Our science editor explained that when potato cells are broken and exposed to the air during grating, an enzyme called polyphenol oxidase mixes with other compounds in the potatoes, resulting in discoloration. Salt, especially salt in solution, inhibits the enzyme and thus reduces discoloration.

Putting the idea into action, I prepared two batches of salt water made with 4 teaspoons of salt and 2 cups of water. I grated a pound of Yukon Golds and a pound of russets (both were performing equally up to this point) and tossed each in the salt water before wringing them dry. The solution was remarkably effective. Both batches retained their color for more than an hour. Though it was a close call, I settled on Yukon Golds for their buttery, slightly sweet flavor.

The saltwater wash had a couple of additional advantages: The cakes were now seasoned throughout, and the shreds were a bit more cohesive. It turns out that salt decreases the temperature at which potato starch gelatinizes (swells with moisture and bursts). That gelatinized starch acts as a glue that helps the shreds adhere.

Things were looking up, but the cake could have been easier to flip, and the interior was still wet and unevenly cooked. I was not ready to fuss with fully cooking the potatoes by boiling or baking them before frying, but I wondered if a quick stint in the microwave might help.

I transferred a batch of shredded potatoes from their towel to a bowl; after 5 minutes in the microwave, the shreds were steamy and a bit sticky. After 10 minutes they were quite cohesive. I transferred them to the hot skillet and carefully pressed them into a cake.

This batch was easier to flip, and because a lot of moisture had cooked off in the microwave, it also browned more readily. The exterior was crispier, and the inner potatoes were evenly cooked and far less gummy. The only problem? The potatoes had cooked too much and had thus lost the distinctive shredded texture that characterizes hash browns. Inside, they were more like mashed potatoes.

For my next batch, I cooked half the potatoes for 5 minutes, added the remaining potatoes, and then cooked this mixture for another 5 minutes. When I pressed the potatoes into the skillet, the softer, more cooked portion bound the shreds together. This cake had a crispy brown crust and the texture I was after.

But shaping the potatoes into a cake in the hot skillet didn’t feel terribly safe, and I wondered if I could make the cake even easier to flip. So instead of transferring the next batch of microwaved potatoes to the skillet, I placed them in a greased 8-inch cake pan. After they had cooled a bit, I pressed them firmly into a smooth disk. After about 20 minutes in the refrigerator, the potatoes were completely cool, and I tipped the disk out onto a plate and slid it into the hot skillet.

I discovered that this technique had virtues beyond making the cake easier to handle. This smooth, compact potato cake didn’t have as many nooks and crannies, so it wasn’t as likely to stick to the skillet, which meant I could fry it in just 2 tablespoons of oil per side, provided I used a conventional stainless-steel skillet instead of a nonstick one. Using less oil also meant that the cake was less greasy. Another bonus: make-ahead potential. I found I could leave the potato cake in its pan in the fridge overnight. In the morning all I had to do was flip it out of the pan and fry it.

Because oil beads up in most nonstick pans rather than coating them evenly, we had to use at least 1/4 cup of oil per side to ensure an even coating and thus even browning. A conventional skillet required half as much oil to cover its surface and thus produced an evenly browned potato cake that wasn’t greasy.

Mrs. Rorer probably wouldn’t endorse my hash browns recipe, and she might even worry for my mental health, but with a recipe this good, I’d be crazy not to make them.