Caption Settings Dialog
Beginning of dialog window. Escape will cancel and close the window.
Watch Every Step
We set out to perfect the back-of-the-bag classic with a cookie that was crisp at the edges, chewy in the middle, and full of rich toffee flavor.
Saved
Print
Get the RecipeThe Perfect Chocolate Chip Cookie

Since Nestlé first began printing the recipe for Toll House cookies on the back of chocolate chip bags in 1939, generations of cooks have packed them into lunches, taken them to bake sales, and kept them on hand for snacking—arguably more so than any other kind of cookie. I’ve made countless batches myself over the years. The recipe is so easy: Cream butter and sugar (half white and half brown), add two eggs and vanilla, then mix in all-purpose flour, salt, baking soda, some chopped nuts, and the chips. Drop tablespoons of dough on a cookie sheet, bake at 350 for 10 minutes, and you’re done.

The Toll House cookie’s cakey texture and buttery flavor certainly have their appeal. But is it really the best that a chocolate chip cookie can be? In my opinion, a truly great cookie offers real complexity, not just a one-note sweet taste and uniform texture. My ideal has always been this: a chocolate chip cookie that’s moist and chewy on the inside and crisp at the edges, with deep notes of toffee and butterscotch to balance its sweetness. What would it take to achieve the perfect specimen?

I’m not the first to think the Toll House cookie could stand improvement.

Not too long ago, The New York Times published a recipe inspired by famed New York City pastry chef Jacques Torres trumpeting an unusual tactic for creating more complex flavor in a chocolate chip cookie: resting the dough a full 24 hours before baking. The rest enables the flour to fully absorb moisture from the eggs, leading to drier dough that caramelizes more quickly in the oven and achieves richer flavor. Or at least that’s the theory. When I tried the recipe, tasters found it did have a slightly deeper toffee taste than the Toll House cookie—but not nearly enough to warrant the inconvenience of a 24-hour rest.

Several Boston-area bakeries employ their own dough-resting techniques, some of them even more drastic: At Flour Bakery in the South End, chef Joanne Chang swears by a rest of two or even three days. Clear Flour Bread, near our offices in Brookline, portions the dough and freezes it before baking, a trick that helps prevent the dough from spreading too much (and that keeps the center of the cookie moist and chewy). Fine ideas for professional kitchens—but who at home wants to wait two days to bake or try jamming even one cookie sheet into the freezer?

Other chefs endorse “pet” ingredients to get better results. Following the lead of pastry chef Christina Tosi at Manhattan’s Momofuku Bakery and Milk Bar, I added milk powder to the Toll House dough. Tosi finds it brings depth to her baked goods; I found it just made the cookies taste milky. I also experimented with a slew of even less likely additives, including tapioca powder, brown rice flour, and xanthan gum—all suggestions for ensuring chewier texture. In each case, tasters were unanimous: No, thanks. 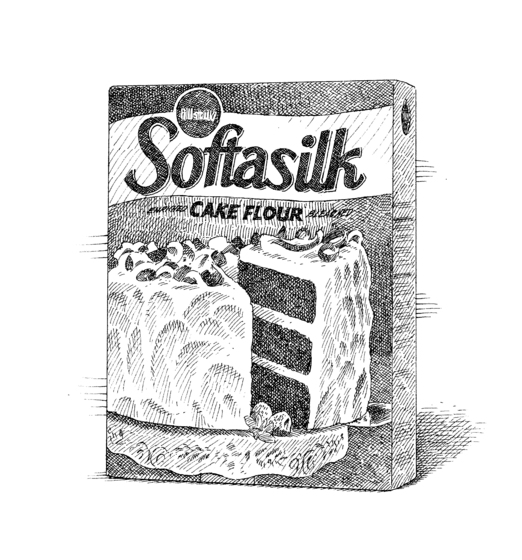 When making baked goods that should be tender and delicate, using cake flour is an easy way to reduce the protein content in the batter and minimize gluten production.

I wasn’t having luck on the flavor or chewiness fronts, but an approach for increasing crispness from the Toll House creator herself, Ruth Wakefield, seemed worth trying: In a variation on her chocolate chip cookie recipe published in Toll House Tried and True Recipes (1940), Wakefield swaps all-purpose flour for cake flour. But the swap yielded a cookie so crumbly that it practically disintegrated after one bite. I wasn’t exactly surprised. Cake flour has less protein (6 to 8 percent) than all-purpose flour (10 to 12 percent). Protein is one of the building blocks of gluten, which gives baked goods their structure. The less protein, the less structure, and the more crumbly the end product.

It was time to come up with my own ideas. Since small tweaks in a baking recipe can translate to big differences, I would break down the Toll House recipe into its main components and see what changes I could invoke by playing around with ingredients and proportions.

I decided to start by tackling texture, first zeroing in on the impact of the fat. I already knew I wanted to stick with butter—vegetable shortening and oil could never compete with its rich flavor. The Toll House recipe calls for creaming the butter with the sugar, which creates tiny air bubbles that bring a cakey lift to cookies. Developing a recipe for Brown Sugar Cookies, I discovered that melting the butter before combining it with the other ingredients led to a chewier texture. Here’s why: Butter contains up to 18 percent water. When butter melts, the water separates from the fat and can then interact with the proteins in flour to create more structure-enhancing gluten. Melting the two sticks of butter called for in the Toll House recipe created a relative abundance of water (more than 3 tablespoons), for cookies that tasters found noticeably chewier.

Browned butter, or beurre noisette as it is called in French, translates literally as "hazelnut butter"; as the butter browns, it takes on the flavor and aroma of toasted nuts.

Since I was melting butter, I saw an opportunity to brown it, a technique we often use in the test kitchen to add nutty flavors to food. Sure enough, it worked here as well. But since browning burns off some of the butter’s moisture, I made sure not to brown all of it.

Next ingredient under the microscope: sugar. Besides adding sweetness, sugar affects texture. White sugar granules lend crispness, while brown sugar, which is hygroscopic (meaning it attracts and retains water, mainly from the air), enhances chewiness. All that moisture sounded like a good thing—too good, in fact. Cookies from the all-brown-sugar batch I baked were beyond chewy; they were so moist, they were nearly floppy. The Toll House recipe calls for an equal amount of white and brown sugar; I got the best results when I simply upped the brown sugar (tasters preferred dark for its deeper flavor) to 60 percent and knocked the granulated down to 40 percent.

Next came flour. I had already seen how cake flour, with its low protein content, yields a crunchy, crumbly cookie. What if I took the opposite tack and tried bread flour, with its higher protein content of 12 to 14 percent? Again, this was going too far: The cookies were so dense and chewy that they were breadlike. In the end, just cutting back on the all-purpose flour by 1⁄2 cup increased moistness in the cookies and allowed the chewiness contributed by the brown sugar to come to the fore. The only problem: With less flour, the cookies were a little greasy. To resolve the issue, I decreased the butter by 2 tablespoons.

Finally, I was ready to evaluate the role of eggs in my batter. I knew from experience that egg whites, which contain much of the protein in the egg, tend to create cakey texture in baked goods—not what I wanted in my cookies. What’s more, as the cookies bake, any white that isn’t fully absorbed in the batter readily dries out, which can leave a cookie crumbly. Eliminating one egg white was the right way to go, resulting in cookies that were supremely moist and chewy.

I had achieved chewiness, but what about my other goals? The crisp edges and deep toffee flavor were still missing, and short of melting candy into the dough, I was stumped on how to create these effects. That’s when batch number 43 came along.

In the middle of stirring together the butter, sugar, and eggs, I stopped to take a phone call. Ten minutes later, I found the sugars had dissolved and the mixture had turned thick and shiny, like frosting. I didn’t think much of it until I pulled the finished cookies from the oven. Instead of the smooth, matte surface of the previous batches, these cookies emerged with a slightly glossy sheen and an alluring surface of cracks and crags. One bite revealed a rush of deep, toffeelike flavor. Mysteriously, these cookies finally had just the texture I was aiming for: crisp on the outside and chewy within. When I made the cookies bigger (3 tablespoons versus the rounded tablespoon called for in the Toll House recipe), the contrast was even greater.

I knew it wasn’t just luck, so I pulled our science editor onto the case. His theory was that by allowing the sugar to rest in the liquids, more of it dissolved in the small amount of moisture before baking. The dissolved sugar caramelizes more easily, creating a spectrum of toffee flavors and influencing texture. When sugar dissolved in water is heated, the moisture burns off and its molecules break apart, creating a brittle, amorphous structure that translates to crisper texture. But that effect occurs mainly at the cookie’s outer edges. Just like an evaporating lake, as moisture on the perimeter disappears, the remaining moisture becomes concentrated in the center.

Now all that was left was finessing the baking time and temperature. With caramelization in mind, I kept the temperature hot, 375 degrees—the same as for Toll House cookies. Watching carefully, I left the cookies in the oven until they were golden brown, just set at the edges, and soft in the center, between 10 and 14 minutes.

I sat down with a tall glass of milk and a sample from my weeks of labor and more than 700 cookies baked. My cookie was crisp and chewy, gooey with chocolate, with a complex medley of sweet, buttery, caramel, and toffee flavors. Perfection is a subjective judgment at best, so I held one more blind tasting, pitting my cookie against the Toll House classic. The verdict? My cookies weren’t just better—they were perfect.